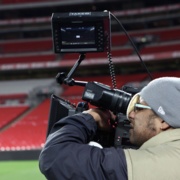 Damian is a London based Director of Photography who has been working in the
industry for 22 years. He has worked on feature films, television programmes,
documentaries, commercials and corporate films.

Damian loves shooting and working with Directors to create something truly
memorable on screen, he gets a great buzz from working with the team as a
whole.

As well as working on films such as Johnny English Reborn, Les Miserables, and
with directors Kevin McDonald and Asif Kapadia, Damian has shot for many
commercial clients including: Strongbow, British Gas, Rolex, Marks & Spencer,
Land Rover, HSBC, Lastminute.com and Elite Models.

Damian shot the BBC documentary series ‘Black Hollywood: They’ve Gotta Have
Us’, which was nominated for an RTS award this year. His documentary feature
‘Against the Tides’ is being released nationally in cinemas in May.

In 2011 BAFTA (the British Academy of Film & Television Arts) selected forty two
industry professionals as Britain’s key emerging talents and took them to
the BAFTA Brits to Watch event in Los Angeles. Damian was one of the two DoPs
invited to attend.

We welcome him as the judge and presenter of the International Animation category.