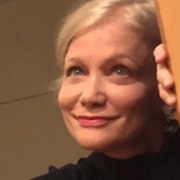 Lisi Russell was wife and creative partner of prolific film director and local lad Ken Russell (Women in Love, Tommy, Altered States, Valentino) for 12 years, having met him at age 17.

Ken and Lisi ran a garagiste movement of (very) independent films in New Forest locales and in Wales, making nine movies from 1999-2012 (Fall of the Louse of Usher, Kitten For Hitler, Revenge of the Elephant Man, Boudica Bites Back) and television specials (Composer on a Bicycle). Lisi has also acted in the same films as well as in Invasion of the Not Quite Dead (2019), Puzzleface (2012), and Trapped Ashes (2006).

She performed in three shows at Edinburgh Festival in 2016 and on the New York stage with Randy Jones of the Village People (2015) and Brad Dourif (Chucky, Wise Blood) in 2013.

She is a published poet and playwright. She provides the commentary on Ken Russell’s Gothic (2018) and Lair of the White Worm’s (2017) Vestron blu-rays.

She was presenter of Film Awards at Keswick Film Festival in 2017. For Burberry she subtitled their Paris presentation of Ken Russell’s film House in Bayswater (2017). She has contributed to magazine articles for Rue Morgue and ScreemMagazines. Guest podcaster for Criterion Now, Wrong Reel and Flixwise and is a yearly presenter at Alamo Drafthouse Cinema in NYC.

She adheres to Ken Russell’s film-vitamin prescription: “One film a day.”

Lisi has specially requested that she can help judge the horror films - so who are we to stop her?

We welcome her to the judging panel and as the Presenter of the International Horror category.