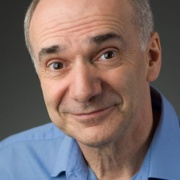 Mark has been a professional actor, director and film maker for over 25 years. In this time he has had many roles in mainstream TV shows, films and theatre.

Mark also has other industry connected irons in the fire. He has run his own corporate entertainments and production company TrueView Events, for over 23 years during which he has written several murder mystery days and performed in well over 1000 Murder mystery comedy shows.  As well as this, Mark has written, filmed and directed many TV scenes for professional actors TV showreels.

Film roles have included Dave in Down Terrace and the Librarian in the iconic torture scene in Kill List, both directed by Ben Wheatley, and more recently opposite Ryan Reynolds as Toby in Criminal. Marks TV roles have included Suspicions of Mr Whicher, The Bill, Holby City, Dr Who, and most recently;  Eastenders as Tony, Doctors as Paul, This Country as Kurton’s boss Terry and the Christmas “live” transmission of Not Going Out with Lee Mack as Clive the drunken Christmas Turkey impersonator!

We welcome him as the judge and presenter of the International Sci-Fi category.